New Tax Foreclosure Report: Looking Back At the 2017 Tax Auction

Jerry from the Loveland team here with a post about a new report written by Greg Markus with Detroit Action Commonwealth, made with the assistance of our software and analysis by our team, and supported by a grant from The Sociological Initiatives Foundation.

See the report here: Looking Back at the 2017 Tax Foreclosure Auction: 2020 Report. 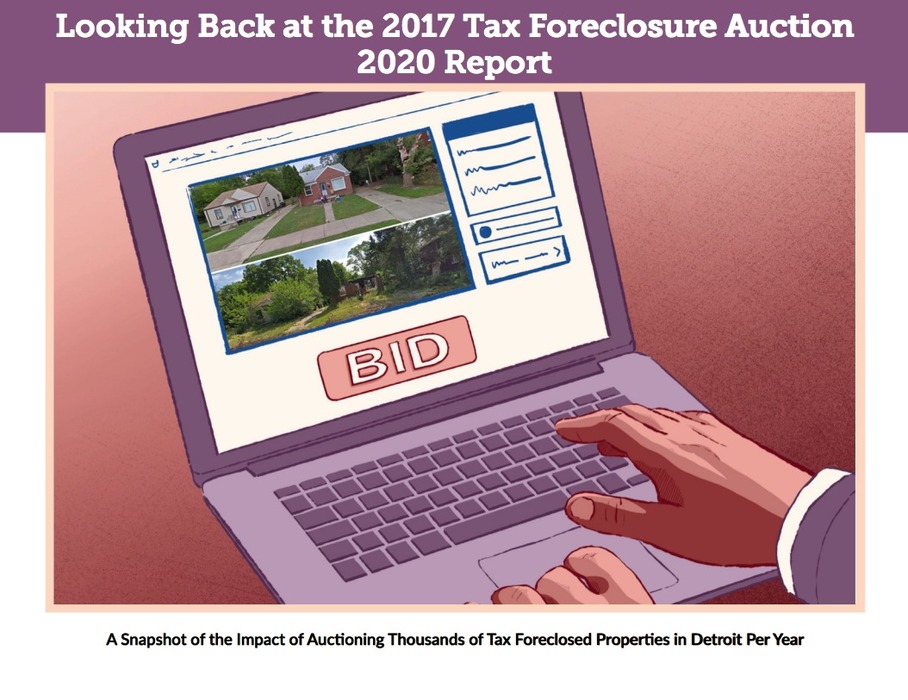 Those of you who have followed our work over time know that our headquarters is in Detroit, MI and that the intense property and land-use challenges of Detroit are more than close to our hearts. Over the years we have been involved in many projects to improve our shared understanding of the city and to advocate for better outcomes for Detroiters, Detroit neighborhoods, and Detroit property. The research isn’t always pretty, because the challenges aren’t pretty.

Chief among these challenges is an incredibly encumbered and fragile Detroit property tax base combined with Michigan’s incredibly aggressive and punitive tax foreclosure law that seizes and auctions properties that owe as little as $1 from 3 years ago. This combination has led to approximately 150,000 Detroit properties being foreclosed and auctioned since 2002 (that’s more than ⅓ of properties in the city), including more than 50,000 occupied homes, with the majority of tax foreclosures occurring since Detroit’s bankruptcy in 2013, though programs and payment plans have been chipping away at the auction numbers in recent years.

This tax foreclosure policy is a beast that has proven largely impenetrable to holistic review and systematic change, with dire consequences for the city’s landgrid, neighborhoods, and the people directly affected. While the law’s original intent was to quickly return abandoned property to productive re-use, over time it became a force for separating people from their homes at scale and distributing property ownership to distant buyers.

We hope that while things are on pause that the findings of this report — which include a look at how many properties in the 2017 auction were occupied and are occupied now; how many were occupied by renters who were not responsible for taxes but faced uncertainty and eviction after the property was sold; how many out-of-town buyers purchased the properties; how the new owners are keeping up on the taxes, and the impact on current occupancy — contribute to giving policymakers pause and help lead to changes that turn this annual ritual from an exercise in self-harm to a more thoughtful and humane process that consciously achieves shared goals for a better, happier, healthier city.

If our team or our software can be helpful to you in doing similar kinds of property research, whatever the issue you are exploring may be, contact us at team@landgrid.com.

Be healthy, be safe, everybody!

More on the Blog